Israel would rather Trump be U.S. president instead of Hillary or Bernie says Likud official 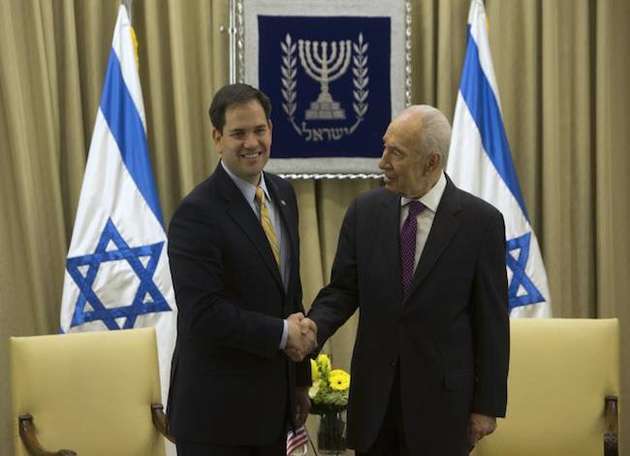 JERUSALEM, Israel - Many in the Israeli right are coming out in favour of Marco Rubio as the U.S. presidential candidate likely to provide the most support to the Jewish state.

A senior official of Likud, Benjamin Netanyahu's political party, said in the Israeli Knesset last week that he would prefer Rubio, and as a second choice he nominated Ted Cruz.

"Of course we prefer Republicans over Democrats," the Likud official was quoted by The Jerusalem Post on Monday as saying. "The Likud and the Republicans have a lot in common, ideologically."

"Even if Trump wins, he's better than a Democrat," he said.

The Likud official did however go on to say: "The U.S. chooses its leaders and we don't, and we will be happy to work with whoever is elected."

Rubio is being backed by powerful forces in the Israeli right.

J. Philip Rosen, the chairman of the board of American Friends of Likud and a member of the Republican Jewish Coalition's board, endorsed Rubio back in May last year, and prior to last week's Iowa primary wrote to a mass mailing list asking people to "join the Rubio team," even if they usually vote for Democrats.

Rosen called Democratic candidates Hillary Clinton a "crook" and Bernie Sanders, a "socialist/communist," both of whom he says will press for a Palestinian state.

"It is becoming increasingly clear that Marco Rubio is the candidate who can and will beat Hillary/Bernie," he wrote.

"This is a candidate who says Judea and Samaria instead of 'West Bank' and recognizes that the capital of Israel is Jerusalem where the U.S. Embassy should stand," Jeremy Saltan, the Bayit Yehudi's Anglo Forum chairman and a close political adviser to Education Minister Naftali Bennett told The Jerusalem Post. "The senator said that Israel is a priority to him and pledging that Israel will be his first visit as President shows that."

"Rubio's strong national security policies are very close to the ideology of many Bayit Yehudi voters," he added.

Cruz, Jeb Bush and Trump have all said they would move the U.S. Embassy to Jerusalem if elected.

Why are Cruz and Trump not getting the same support from Israelis?

"They are very populist and demagogic, and Israelis and Jews generally react negatively to those kinds of public figures and personalities, with good reason. We've had experience with those types," said Marc Zell, Co-Chairman of Republicans Abroad Israel and Worldwide Vice President of Republicans Overseas.

Of particular concern to Israel is the financial support received from the U.S. In security alone, Israel receives $3.1 billion a year and will do so until next year under a 10 year agreement struck in the final years of the Bush administration.

Barack Obama is currently negotiating a new agreement and is believed to be supportive of increasing the level of Israeli support in view of claims by Prime Minister Netanyahu that the country is facing increased threats to its security. Media reports are suggesting the Israeli prime minister has requested the $3.1 billion annual grants be increased to $5 billion.

"I think we'll probably reach a successful conclusion, I hope in the coming months," he told the World Economic Forum in Davos in January. "It's a sign of how strong the American-Israeli alliance is. You know? We can have our disagreements. We do. They're always publicized, they're very dramatic. But the alliance between the United States and Israel is so strong and so powerful that the only thing that's collapsed is the talk of the imminent American-Israeli collapse. It's very clear that's not going to happen and that this partnership is rock-solid and will remain so."