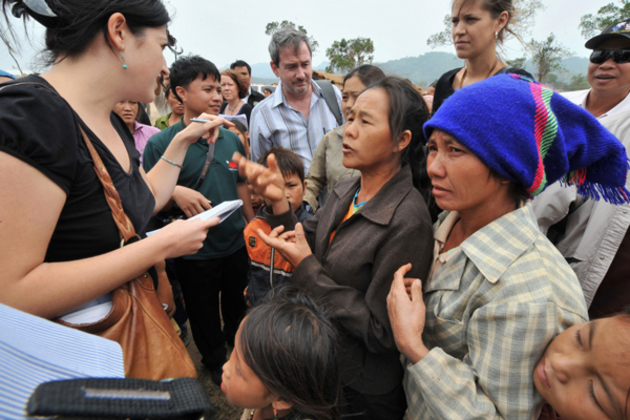 Laos's latest dismal ranking on an annual international press freedom index issued Wednesday came as no surprise to rights groups, especially since the country enacted a regulation five months ago that requires foreign journalists, embassy personnel, and international organizations to submit their reports to government officials for review before publication.

The Paris-based watchdog group Reporters Without Borders released its annual World Press Freedom Index on Wednesday, ranking Laos 173 out of 180 countries. Laos, which will host major regional diplomatic events in 2016, has ranked near the bottom of the list for several years.

"This year's annual report on Laos is virtually a carbon copy of previous years, which shows that serious human rights violations in the country continue unabated, and the government is by no means interested in addressing the ongoing abuses," said Andrea Giorgetta, director of the Asia desk at the International Federation for Human Rights in Bangkok, Thailand.

The controversial regulation enacted last Nov. 24 requires foreign journalists and those who work for international organizations and embassies to submit their reports on Laos to the Ministry of Foreign Affairs for editing prior to publication.

"The new regulations for foreign journalists are clearly designed to prevent any independent agencies from establishing a presence in Laos and reflect the oppressive conditions that exist in the country with regard to freedom of information," Giorgetta said.

Vanida Thepsouvanh, president of the Paris-based Lao Movement for Human Rights, told RFA's Lao Service that the ranking continues to confirm the repressive conditions on freedom of information for the four decades since the establishment of a communist regime in Laos following the Vietnam War.

"So there is nothing surprising about the Lao decree of Nov. 24 on news coverage by foreign media, embassies, and international agencies, coming out with regulations and restrictions that are inconceivable in countries with a free media," she said.

Prepping for the ASEAN summits

The report comes as Laos gears up to host two annual Association of Southeast Asian Nations (ASEAN) summits in the capital Vientiane later this year--events that will be heavily covered by regional and international media.

U.S. President Barack Obama is expected to visit Laos in September for one of the summits, the first visit to the country by a sitting American president.

Laos, one of the least developed members of ASEAN, holds the 10-member organization's chairmanship this year, hosting the two annual summits where the 10 member states discuss key issues in Southeast Asia.

It is a key year for the group as it works on the implementation of the ASEAN Economic Community, formed at the end of 2015.

"Although the Lao official press stated that there will not be any problem for foreign media during the ASEAN events, it remains to be seen if the foreign media will be free to cover any subject on Laos while in Laos," Thepsouvanh said.

A senior editor of an English-language newspaper in Thailand that covers Laos said the government regulation restricting journalists and others contradicts the trend of regional development among ASEAN member states.

"Countries in ASEAN, of which Laos is holding the current chair, need to open up to the world, and the best way to do that is to engage with the world through media," he told RFA.

He also said the measure runs counter to media ethics and codes of conduct that forbid journalists from subjecting their articles to censorship, and that the foreign affairs ministry lacks the ability and the manpower to edit all reports by foreign media outlets.

"I don't see any possibility for the Lao government to enforce such a regulation," said the editor, who declined to be named. "Unless the foreign media agree to set up their offices in Vientiane, the government has no jurisdiction to enforce such a law to control them. In this sense, the regulation is a paper tiger."

Laos discredited itself and the ASEAN community for issuing a regulation that violates freedom of expression and basic human rights, the Thai editor said.

The enactment of the regulation also reflects the failure of the Lao government to manage information in the modern world, he said. Instead, he suggested that the government make efforts to provide foreign media operating inside the country with accurate and sufficient information for them to do their jobs.

"Easy access and the free flow of information would allow the government to handle media and information effectively and wisely," he said.

A foreign journalist based in Cambodia who has reported from Laos agreed that authorities will have a tough time trying to enforce the regulation.

"Enforcing laws such as this is difficult outside Vientiane where the central government loses influence in favor of local leaders who make decisions at their own discretion," she said.

The journalist, who requested anonymity, said it was typical of the Lao government to issue a regulation that appears daunting but was next to impossible to enforce.

"[Authorities] lack the capacity, and no journalist would ever willingly cooperate with this law, except perhaps those working for Xinhua [Chinese state media]," she said, because most reporters do not submit their articles to anyone outside their news organizations for editing or approval before publication.

"Journalists already know to be wary because of existing laws, so most have a system to work around Laos's limitations," she said, adding that foreign journalists are not allowed to officially report from Laos unless they have a government minder.

But the regulation could have an impact on nongovernmental officials and foreign workers in Laos who are leery of speaking on the record after the government expelled Anne-Sophie Gindroz, Lao country director of the Swiss development organization Helvetas, in December 2012, she said.

"She was fairly outspoken, as far as I understand, and that has had a chilling effect on foreigners, which I personally experienced while writing and visiting," the journalist said.

Gindroz had criticized the Lao government as creating a hostile environment for development and civil society groups by stifling freedom of expression and association prior to an annual meeting on foreign aid strategy.

The government said she was expelled because it was "dismayed" by her "improper behavior" and "unconstructive attitude" towards Laos.