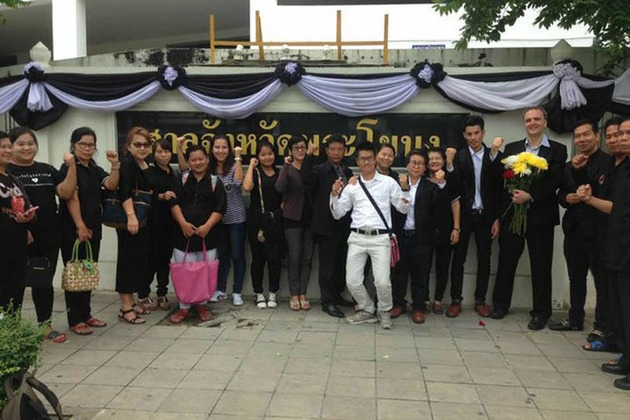 Thailand's top court Thursday dismissed a criminal defamation claim against a labor rights activist ?over jurisdictional issues, but he still faces jail time from a conviction in another complaint brought by a pineapple processing company.

The Supreme Court ruled that Briton Andy Hall, who has campaigned for years in Thailand for the rights of migrant workers from Myanmar and other countries, could not be tried in Thailand because the plaintiff had no power to prosecute him over comments made in another country. The charges were filed over comments made to the Al-Jazeera television network three years ago in Myanmar.

"I am glad that the unfair charge came to an end, but at the same time, we see that this company does not stop, does not end and uses the law to intimidate," Hall told BenarNews, an RFA-affiliated online news service, in a phone interview.

Despite the favorable ruling, Hall still faces three years in a Thai prison as a result of his conviction on similar charges in September.

The Bangkok South Criminal Court then sentenced him to prison and fined him 150,000 baht (U.S. $4,292), after finding him guilty of defaming the Natural Fruit Co. and violating Thailand's Computer Crimes Act.

The court on Sept. 20 handed down a four-year sentence, but reduced it to three years and included the stipulation that he could begin serving the sentence in two years.

Hall vowed to press on with his legal battle against the fruit company even as he faces additional defamation charges.

Hall's attorney, Sira Osottham, said his client must prepare for a pair of outstanding cases and potentially more legal actions against him.

"At present, Andy Hall has two civil court cases at Pra Kanong Court (in Bangkok) and Nakorn Pathom Court," Sira said, adding there was a high possibility that the fruit company would file another civil case.

Meanwhile, a lawyer for the company said it respected the court ruling, but that Hall could expect more legal action soon.

Hall faces prison time over his September conviction for defamation over the online publication of a survey about workplace conditions, in which he interviewed workers - most of whom are from Myanmar - at the Thai pineapple company's plant in the southern part of the country.

According to the survey, workers at the plant that employs some 800 people in Prachuap Khiri Khan province complained that Natural Fruit had violated Thai labor law through paying them salaries below minimum wage, not giving them sick and holiday leave, and employing children, among other allegations.

Hall undertook the research for Finnwatch, and claimed he merely relayed the information he had collected for the Finland-based NGO that advocates global corporate responsibility. In 2013, Finnwatch posted its report on the internet based on Hall's work.

On Thursday, the U.N. Human Rights office in Bangkok issued a statement praising the court's decision. But it also called on the Thai government "to drop charges against all human rights defenders who have been charged with criminal offenses for reporting human rights violations in accordance with its obligations under international human rights law."