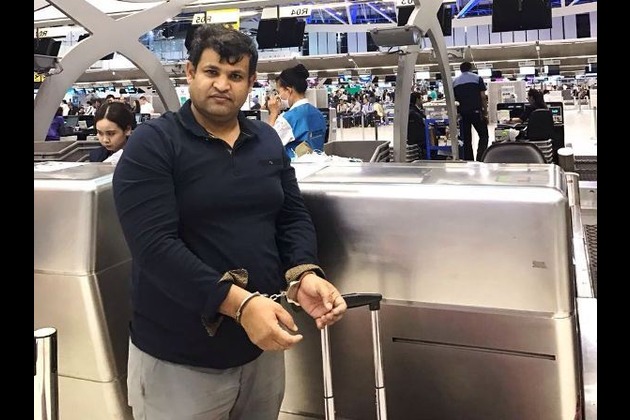 Bangkok [Thailand], Nov.30 (ANI): The detention and deportation of two Baloch political activists and a human rights campaigner by authorities in Thailand has invited global condemnation.

On November 26, Thai police arrested Munir Mengal, the founder of the Baloch Voice Association and Bilal Baloch, a journalist, both residents of France from a Bangkok hotel and deported them for holding a conference on Balochistan.

Police also arrested and interrogated Hong Kong-based Asian Human Rights Commission (AHRC) commissioner Bashir Naveed and placed him in a detention centre for over 24 hours the next day. He was later deported to Hong Kong.

Thai authorities have revoked their visas and added that they had no permission from the government to conduct the conference. Munir Mengal, however, told ANI from Paris that he was holding a valid non-immigrant (ED category) visa and had taken permission from Thai Embassy in Paris about holding a conference in Bangkok.

The conference was to be held between November 28-30 on the theme "Balochistan Geopolitics and the Baloch? An analysis of Past, Present and Future". It was expected to be attended by many delegates from Pakistan, Europe, Russia, Japan and the United States.

Munir told ANI, "The Baloch will not stop their demand to regain sovereignty of their land. The Baloch people have been suppressed and are facing a human rights crisis. Now, China has joined Pakistan to loot the resources in Balochistan."

Many delegates, who had already reached the venue to attend the conference, were surprised by the act of the Thai authorities.

They blamed the Thai government for acting against the Baloch and others on behest of China and Pakistan, as the conference was about to raise the issue of multi-billion dollar China Pakistan Economic Corridor (CPEC) project.

Col. Shun-ichi Fujiki, a delegate from Japan, said, "There is a lot of investment coming from China to Thailand and obviously China may have requested the Thai government to detain and deport them".

He added, "Pakistan does not have much influence in Thailand, but China does, as they have a huge investment there".

Robert Darius, a delegate from Dallas, Texas, in the United States, said, "We love Thailand, it's a great country, but we wonder what triggered the Thai government to cancel this conference. We are not happy about that".

Speaking about the CPEC, he added, "The China Pakistan Economic Corridor will bring more Chinese influence in South East Asia, South Asia, Central Asia, Persian Gulf and the Arabian Peninsula. It will be a great boon for Chinese to export things through a land route all way from China directly and will save great deal of money. But it will also inject regional rivalry".

"I hope that indigenous people of Balochistan have some benefit and gain from this economic corridor. But, people in Balochistan feel they have nothing to gain from CPEC", added Robert.

Munir Mengal said that a delegation from Pakistan had applied for visas to attend the Bangkok conference, but none of them were allowed.

He said, "This act shows that how China and Pakistan are in a state of panic about the voices of Baloch people. This action shows the ugly face and intentions of these states, and that they have nothing for the Baloch.

"They want to maintain their occupation of Balochistan and eliminate the Baloch people through military operations and aerial bombardments and loot their resources", added Mengal. (ANI)