Nepalese Trail Runner Guides Others to the Top of the Game 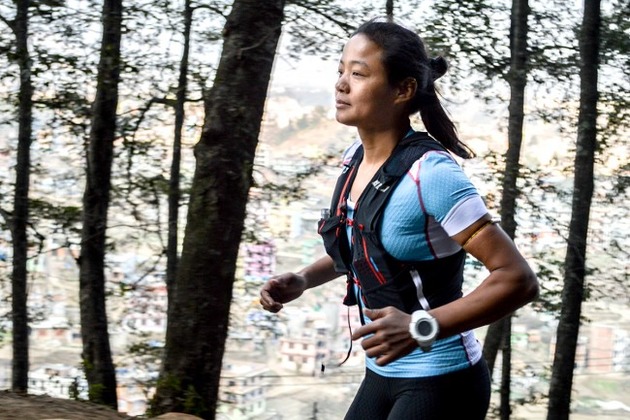 The early morning light falls on Sunmaya Budha and Purna Laxmi Neupane as they jog up rocky Nagarjuna hill, about 7 kilometers (4.3 miles) from Kathmandu, Nepal's capital. They are training to compete in the 2016 Asian Skyrunning Championship, a high-altitude trail running event where competitors race long distances over mountain terrain.

Budha, 18, and Neupane, 17, are closely followed by a woman on a bicycle, and they head to a clearing where the woman dismounts and starts leading them in exercises.

Mira Rai, 29, left, trains with Purna Laxmi Neupan, 17, middle, and Sunmaya Budha, 18, right, in Nagarjuna, Nepal on Nov. 25, 2016, before their first international ultra marathon race in Hong Kong. Rai did intensive two-week training with Budha and Neupan in Kathmandu, for the 2016 Asian Skyrunning Championship in Hong Kong in December.

The woman coaching them is Mira Rai, Nepal's leading trail runner. And Rai, 29, is determined to pass on her knowledge and skills to the two younger women she is mentoring.

Budha and Neupane carefully follow every move that Rai makes, their eyes never leaving her. After a few minutes, the stretching is done, and they are back on their jog.

"Don't be shy," Rai calls out to them, as she mounts her bike again. "Enjoy yourself when you run."

Less than three years ago, Rai had never heard of trail running. Today, she is among the top female trail runners in the world, and is determined to help other Nepalese reach the top, too.

Rai is one of a handful of trail runners in Nepal, and the first Nepali woman to win international trail running events.

Trail running and ultra running, while not yet part of the Olympics, have grown in popularity internationally. In Nepal, the sport was introduced by a small group of local and foreign enthusiasts, and the Annapurna 100 race in 1995 was one of the first trail races in Nepal.

Although she didn't realize it until 2014, Rai was born to be a trail runner.

She grew up in the remote village of Sano Dumma in Bhojpur district, a mountainous area in Nepal's eastern region. Residents didn't have electricity or potable water, and had to trek for miles for every need.

"From a young age, I started carrying loads," Rai says. "I accompanied my mother to the market. I carried 10 kilograms (22 pounds) of goods, consisting of rice, salt and cooking oil."

Trekking through mountains on footpaths or on rocky paths, often barefoot, was a common activity for Rai.

Mira Rai trains for ultra marathons every day on different routes and terrains in the Nagarjuna municipality of Kathmandu, Nepal, as shown in this photo from Dec. 24, 2015. She rides her bicycle from Balaju, where she lives, to the hills of Nagarjuna to train for anywhere between 3 to 7 hours.

"In a day, we had to go up and down the hill three to four times to get water," Rai says. "I couldn't concentrate on my studies. Also, we hardly had enough to eat."

She dropped out of school in the seventh grade and earned a little money by carrying goods to sell for a small profit at the market, but she looked for opportunities beyond her village.

"Women here usually get married and do housework," Rai says. "Given an opportunity, I knew I could do something. I knew if I stayed home I wouldn't get any opportunities."

That opportunity came when she was 14.

When Maoist rebel recruiters came to her village, she joined them, eventually moving to a Maoist jungle camp, where she lived for two years. At the camp, she was introduced to sports as part of her training, and she loved it.

In 2006, the Maoists signed a peace agreement with the Nepalese government, ending the civil war, and Rai returned home having never participated in combat. She went back to school and sat for her School Leaving Certificate exam - the 10th grade national exam that all Nepalese take before moving on to the next stage of their education. She began studying agriculture, but dropped out in 2013 and considered going to Malaysia as a migrant worker.

But her coach from the camp, karate instructor Dhurba Bikram Malla, encouraged her to start training for marathon running.

"She always was a good runner," he says. "She has power and stamina."

Rai's first competitive event was the Himalayan Outdoor Festival 50 kilometer (31-mile) race in March 2014. She came there thinking it was another training activity, not a competition.

She was only one of two women competing that day.

She won the race, completing the 50-kilometer route in nine hours and five minutes. She received a medal and a cash prize of 7,000 Nepalese rupees ($64.27).

Rai says she realized that day for the first time that she was good at running, and could earn money from it.

"This race was a turning point in my life," Rai says. "I remembered my home in the village, carrying water, cutting grass."

Since then, Rai has participated in nearly two dozen races in Nepal and around the world, coming in first in 13 of them. She has also broken records, most recently in the Mont-Blanc 80-kilometer women's race in France in April 2015.

In July 2016, Rai injured her knee and underwent surgery, forcing her to take a break from competition. She hopes to return to competitive trail running by mid-2017 and in the meantime is encouraging the sport in Nepal.

Mira Rai rides a bike while training with Purna Laxmi Neupan, 17, and Sunmaya Budha, 18, (both not shown) in Nagarjuna, Nepal in November 2016. In July of that year, Rai injured her knee and underwent surgery, forcing her to take a break from competition, but allowing her to train other ultra marathon runners. She hopes to return to competitive trail running by mid-2017.

Rai, voted 2017 Adventurer of the Year by readers of National Geographic magazine, is now inspiring a new generation of young female athletes who are taking up ultra running in Nepal.

Budha and Neupane, from remote villages in Nepal's Jumla district, say they took up trail running after learning of Rai's success and worked with her during two weeks of intensive training ahead of entering the 2016 Asian Skyrunning Championship in Hong Kong in December.

Their work paid off. Budha won the silver in the 50-kilometer MSIG Lantau 50 race, while Neupane came in fourth, and they were ranked the first and second female runners in Asia.

Neupane says it is difficult to be a female runner in a traditional, conservative village.

"In our village, people say that girls should get married and raise a family," she says. "But I got an opportunity to represent my country in an international race."

Neupane says she wants to continue training and racing, but says it is difficult because she needs to help provide for her family.

"Girls in rural areas are physically strong," she says. "Culturally, they are brought up doing household chores. Our daily life trains us from childhood, going uphill and downhill. Our legs are strong. If given an opportunity, girls can excel in this sport."

In October 2016, Rai organized an ultra running race in her home district of Bhojpur. The race drew 124 competitors, all young boys and girls from the area.

"I want to help those who want to achieve something but do not have the opportunity to do so," Rai says. "I have reached this place because of the opportunities I got."

Ram Bahadur Hamal, under secretary of the Ministry of Youth and Sports, says that even though trail running is not recognized by the ministry as a sport, it values Rai's contribution to Nepal.

"We appreciate Mira Rai's efforts," he says. "She has glorified Nepal in the world. We have to reward and inspire such players."