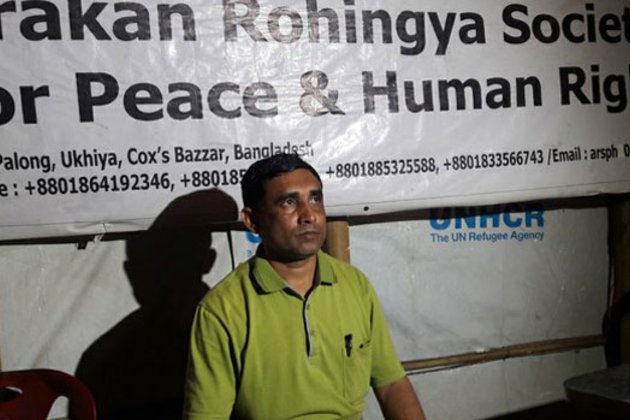 A Chinese government delegation met Rohingya Muslims in Bangladesh, promising each refugee up to U.S. $6,000 if they returned to Rakhine state in Myanmar, a Bangladeshi official and refugee leaders said Tuesday.

Sun Gouxiang, Chinas special envoy for Asian Affairs, met with 15 men and 14 women at the Kutupalong refugee camp in Coxs Bazar on March 3, according to Syed Ullah, secretary-general of the Arakan Rohingya Society for Peace and Human Rights (ARSPH), an NGO.

They asked us whether we would go back if they gave us five thousand to six thousand dollars, Ullah told BenarNews.

We rejected their proposal and asserted that we will in no way return if we are not given citizenship with Rohingya identity and our other demands are not met, he said.

A Bangladeshi official who attended the meeting confirmed to BenarNews, on condition of anonymity, that the Chinese delegation had offered up to U.S. $6,000 to help the refugees rebuild their homes in Rakhine state.

The Chinese embassy in Dhaka did not respond to a BenarNews email seeking comment.

The United Nations estimates that some 730,000 Rohingya fled to Bangladesh at the height of a brutal crackdown launched by the Myanmar military in response to attacks by Rohingya insurgents on security posts in August 2017.

At least 200,000 new houses must be constructed for repatriation of the refugees who have been living in Bangladesh. It would be very difficult to construct so many houses, the Bangladeshi official told BenarNews.

Chinese government offered them the money, so that each Rohingya family can build their own houses when they go back, he said.

But, he said, it would be impossible for the refugees to build their own homes, as most of them have lost the men in their households as a result of the military crackdown that the United States and the United Nations have condemned as ethnic cleansing. Myanmar has denied the allegations.

Delwar Hossain, an official in charge of the Southeast Asia desk at Bangladeshs Ministry of Foreign Affairs, told BenarNews that his office arranged the meeting between the Chinese delegation and the refugees.

They discussed the demands of the Rohingya people, Hossain said.

A short video clip of that meeting, seen by BenarNews, shows Chinese officials talking to Rohingya leaders, some of whom hand documents to the visitors.

A Rohingya leader told the Chinese delegation that the refugees would never accept any repatriation without international security, full citizenship with Rohingya identity and justice, Syed Ullah said.

Muhib Ullah, another ARSPH official, provided more details about the meeting in an interview with BenarNews.

First of all, they wanted to know whether all of us were Rohingya and we would go back, he said. We told them that we would go just now if they accept our demands. Otherwise, we will not go.

If Myanmar grants citizenship, we will return jumping, Ullah said.

Munshi Fayez, Bangladeshs former ambassador to Beijing, told BenarNews that Chinas move to start talking to Rohingya refugees about possible repatriation was apparently aimed at protecting Myanmar, its regional ally, from international pressure, and at gaining a foothold on the economic benefits of the return of the refugees.

Myanmar has created such a situation that China in future may not be able to protect them from international pressure, Fayez said. So, they try to mediate the Rohingya repatriation to save (Chinas) international image.

At the same time, he said, China was seeking a solution to the Rohingya issue for their economic interests.

The Chinese envoy flew out of the country from Dhaka on Tuesday, Bangladeshi foreign ministry sources told BenarNews.

Before travelling to Bangladesh, Sun Gouxiang visited several villages in Rakhine state and met with Myanmars de facto leader Aung San Suu Kyi in the capital Naypyidaw on Feb. 27, according to the state-run Global New Light of Myanmar.