With Trump by his side, Modi rules out third party media on Kashmir 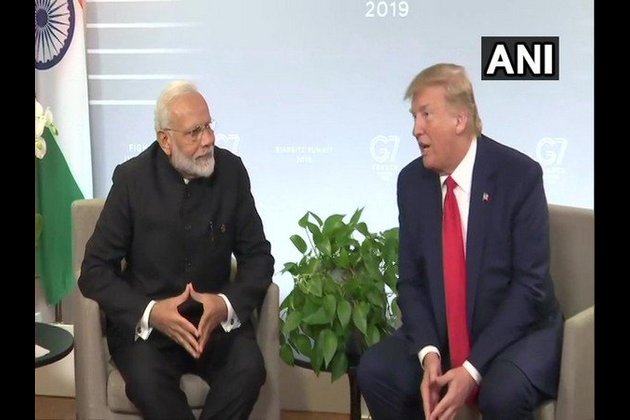 Biarritz [France], Aug 26 (ANI): With US President Donald Trump by his side, Prime Minister Narendra Modi on Monday ruled out any third-party mediation on the Kashmir dispute saying it's a bilateral issue with Pakistan and that the two countries can resolve all issues.

Trump also appeared to agree with him when he said the two countries "will do something good".

"All issues between India and Pakistan are bilateral. We do not want to bother any other country for these issues. And I believe that India and Pakistan, which were one nation before 1947, we will resolve all issues and can find solutions to it," Modi told the media ahead of his talks with Trump on the sidelines of the G7 summit.

"There are many bilateral issues between India and Pakistan. And after Imran Khan became the Prime Minister of Pakistan, I called him up to congratulate him and told him that Pakistan and India need to fight together many issues like diseases, illiteracy, poverty and let us work together for the welfare of our country. We keep talking about the various bilateral issues between each other," Modi said watched by Trump and the officials of the two delegations.

On his part, Trump, who said he spoke to Modi last night, said the Prime Minister feels he has control over the issue and hoped the two countries would "do something very good".

"The Prime Minister feels he has control over the issue. They speak with Pakistan and I am sure they will do something very good," said Trump who had on three recent occasions offered to mediate in the Kashmir dispute between India and Pakistan.

India had rebuffed claims that Trump had discussed his mediation offer with Modi and had made it clear that Kashmir was a bilateral issue.

The US President also congratulated Modi over his election victory, saying the "Prime Minister is a man who is loved and respected in his country".

Trump said that the two sides had some great discussions last night, including trade, military and various things of mutual interest.

Meanwhile, expressing gratitude to Trump, Modi said, "Today I am meeting my friend and the President of world's oldest democracy. This meeting is very important to me. We have been meeting very frequently on many occasions."Addressing the issue of ongoing trade negotiations between the two countries, the Prime Minister said, "India and the US have been continuously negotiating over the issue in recent days and we appreciate and welcome their suggestions on the issue." (ANI)