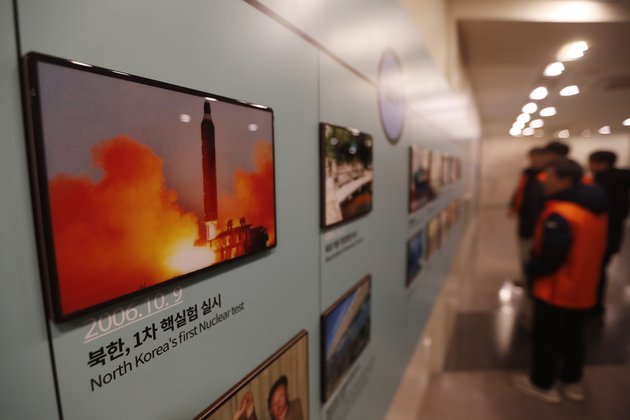 SEOUL - North Korea said Saturday it had conducted a "crucial test" at a satellite launch facility to bolster its "reliable strategic nuclear deterrent."

The test comes just weeks ahead of the country's self-imposed end-of-year deadline for the U.S. to provide more concessions in nuclear negotiations and amid its threats to resume long-range missile or nuclear tests.

The Korean Central News Agency did not say what was tested Saturday and did not include pictures. However, it said the test occurred at the Sohae Satellite Launching Ground, where North Korea a week before said it conducted another "very important test," apparently of a rocket engine.

North Korea has launched 13 rounds of short- or medium-range missiles since June. Some analysts predict it may soon use the Sohae site to launch a satellite into space using long-range missile technology.

Pyongyang is banned from any ballistic missile activity under United Nations resolutions but has in the past used what it called peaceful satellite launches as a way to test long-range missile technology without returning to overt military tensions.

However, North Korea's description of the latest test - as having bolstered its "strategic nuclear deterrent" - suggests to many analysts that Pyongyang may do away with the pretense of a satellite launch this time.

"The language pushes us back to an ICBM (intercontinental ballistic missile) test in the new year, maybe as the leadoff hitter," said Vipin Narang, a nuclear specialist at the Massachusetts Institute of Technology.

North Korea has promised an ominous "Christmas gift" to the United States, saying it is up to Washington to decide what kind of present it will receive.

In recent weeks, North Korea has expressed frustration at the U.S. refusal to acknowledge its end-of-year ultimatum and has increased threats as the deadline approaches.

Last week, North Korea's foreign ministry said Pyongyang had "decisively" made a "definite decision" on what to do, but didn't say what the decision was.

In what appears to be a final check-in to the region ahead of the North's deadline, Steve Biegun, the top U.S. envoy on North Korea, is visiting South Korea and Japan next week.

US Envoy to Visit Seoul as Deadline Looms for Stalled N.Korea Talks Stephen Biegun will be in Seoul for a three-day stay and hold consultations with his counterpart Lee Do-hoon and other officials, South Korea's foreign ministry said on Friday

Nuclear talks broke down in February when U.S. President Donald Trump walked away from a summit in Hanoi with North Korean leader Kim Jong Un.

The two sides resumed working-level discussions in October in Stockholm, but North Korea walked away this time, complaining the U.S. had not made an appropriate offer.

The U.S. has since said it is ready to resume talks.

"We remain ready to take actions in parallel, and to simultaneously take concrete steps towards this agreement," said Kelly Craft, the U.S. ambassador to the United Nations, last week. "But we cannot do this alone - North Korea must make this difficult but bold decision to work with us."

Trump and Kim have met three times since June 2018. At their first meeting, in Singapore, they agreed to work "toward complete denuclearization of the Korean Peninsula." However, the two sides have not been able to agree on what that phrase means or how to begin working toward it.