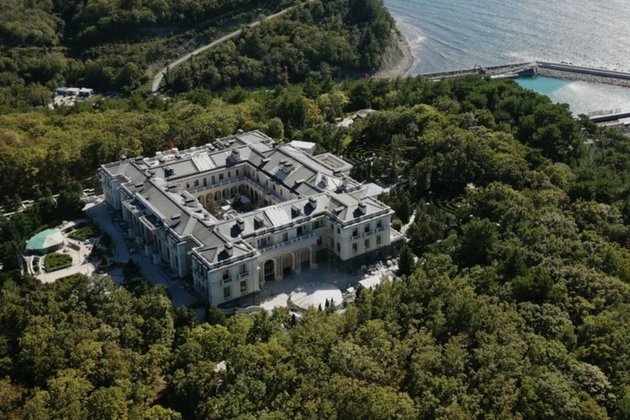 The Anti-Corruption Foundation of Aleksei Navalny issued a fresh investigation on January 19, shining a spotlight on a Black Sea mansion allegedly built for Russian President Vladimir Putin, one day after the opposition leader and Kremlin critic was ordered to remain in custody for 30 days pending trial following his dramatic return to Russia from Germany.

The investigation -- A Palace For Putin -- alleges the luxurious estate on the Black Sea's exclusive Gelendzhik Bay cost at least 100 billion rubles ($1.35 billion).

The report says the site includes a church, a 2,500-square-meter greenhouse, an amphitheater, several residential buildings, and a "special tunnel" that leads to the shore.

One of the rooms inside the property

The palace itself is 17,691 square meters and is said to include a home theater, a lobby with a bar, a hookah bar, a casino and a hall with slot machines, and a swimming pool.

The investigation includes what it says are the first photos made public of the interior of the estate, long known as Putin's Palace, although the Russian leader has denied any link to the property.

For Russia's political opposition, the property has become a brazen symbol of rampant state corruption running straight to the top.

"This in the most guarded place in Russia, in fact, a state within a state, and this is Putin's biggest secret, which is protected by hundreds, even thousands of people -- from unknown guards, gardeners, and builders to the richest and most famous people in Russia," begins a nearly two-hour YouTube video accompanying the report.

According to the investigation, the property -- 39 times larger than Monaco -- "was built so that it could not be approached either by land, sea, or air," with a buffer zone of some 7,000 hectares, allegedly owned by Russia's powerful Federal Security Service (FSB) and leased to the firm that owns the palace.

It said a no-fly zone also has been introduced over the territory of the estate.

The probe also said thousands of estate employees "are forbidden to carry even a simple mobile phone with a camera with them," and all cars arriving at the compound are "inspected at several checkpoints."

It includes photos of the luxurious interior that it says most Russians have never seen.

"Today we will show you Putin's main secret -- his palace. We will show it from the outside and the inside. We have published the architectural plans -- from the layout of furniture to the ventilation grilles. Every room, every corridor, every square meter is from now on the property of the public. Russians will be able to visit Putin's home," the investigation says.

The palace includes a home theater.

In 2010, Russian businessman Sergei Kolesnikov fled Russia after publishing an open letter to then-President Dmitry Medvedev revealing the construction of the lavish Black Sea palace commissioned by Putin and funded with a billion dollars in illegally diverted funds.

The investigation says the estate is now owned by a firm called Binom, and is managed by people allegedly linked to Putin's nephew Mikhail Shelomov. The real owner of the property, however, the investigation claims, is Putin himself.

Kremlin spokesman Dmitry Peskov said he had not seen the report but dismissed it as a rehash of old allegations, and suggested that Putin does not own such a property.

'I'm not familiar with this investigation,' Interfax quoted Peskov saying on January 19. 'However, I can immediately say that this is an old record. We explained many years ago that Putin does not have any palace in Gelendzhik.'

The investigation comes a day after a court in Moscow ordered Navalny to remain in custody for 30 days pending trial on charges supporters say are politically motivated.

The 44-year-old was detained at Sheremetyevo airport after he arrived on January 17 from Berlin, where he had been recovering from a poison attack in August 2020 that Navalny says was ordered by Putin.

Navalny's detention has sparked global outrage and a chorus of international calls pressuring Putin for the Kremlin critic's immediate release.

With reporting by Interfax