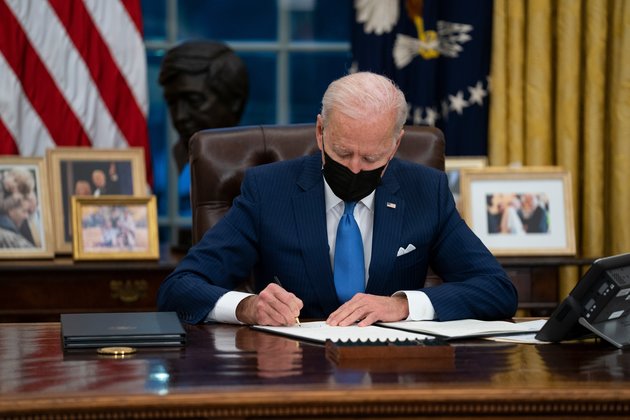 The order aims to avoid repeating the severe lack of personal protective gear such as face masks and gloves that the country experienced during the early months of the coronavirus pandemic last year. It comes as American automakers grapple with a shortage of semiconductors, critical elements in navigation and entertainment systems in modern vehicles.

"The COVID-19 pandemic has underlined the need for resilient supply chains and robust domestic manufacturing, so all Americans have access to essential goods and services in times of crisis," White House press secretary Jen Psaki told reporters on Thursday.

On Wednesday, a senior White House official speaking on background told reporters that "President Biden committed last year to directing the U.S. to take a comprehensive approach to securing supply chains, and the executive order that the president will sign tomorrow afternoon kicks off that process."

According to the official, the reviews will be modeled after the Defense Department's process to evaluate and strengthen the defense industrial base and may include the president's invocation of the Defense Production Act or other financial incentives. The DPA is the primary source of presidential authorities to expedite and expand the supply of materials and services from the U.S. industrial base needed to promote national defense.

"We could talk about buying American all we want but if we have not ensured the supply chain is functioning, we're going to continue to have shortages and stock outs," said Nada Sanders, a professor of supply chain management at Northeastern University.

While most of the work to ensure supply chains are resilient happens at the firm level, federal support to look at the problem holistically is seen as critical to help U.S. companies to invest strategically and become more agile at reacting to fluctuations of supply and demand in times of crisis.

"The key is particularly with dramatic change or rapid change, you've got to do a good job of forecasting and you got to think holistically, you got to look at the entire sort of lifecycle of the operation," said Scott Miller, senior adviser on the global economy at the Center for Strategic and International Studies.

The Trump administration also pushed for investment in shoring up supply chains, mostly through tax cuts incentivizing businesses to bring manufacturing back to the U.S. In April 2020, then President Donald Trump invoked the Defense Production Act to clear up supply-chain issues encountered in the manufacturing of ventilators and production of N95 face masks.

FILE - Workers produce face masks for export, at a factory in Nantong, in China's eastern Jiangsu province, May 14, 2020.

Officials said Biden's strategy to protect the supply chain is different than Trump's protectionist approach. "This work will not be about America going it alone," said Sameera Fazili, Deputy Director of the National Economic Council in a briefing to reporters "We are committed to working with partners and allies to reduce the vulnerabilities."

Biden's executive order will not mention any particular country and look at U.S. reliance on foreign suppliers overall.

"One of the vulnerabilities we are looking at is where we might be excessively dependent on competitors in Asia, obviously including China," the senior administration official said.

The U.S. is dependent on China in a range of critical industries from pharmaceuticals to defense, in part because American firms rely on cheap Chinese exports.

"The corporate quest over the past 25 years to cut supplier costs, with insufficient concern for resilience, has saddled the nation with gaping strategic vulnerabilities in the supply chains for certain critical materials, medications and technology inputs," said authors of a 2020 study by the Center for Energy Studies at Rice University and the U.S. Naval War College's China Maritime Studies Institute.

Being dependent on an adversary is not a good spot to be in said Northeastern University's Sanders. "Having said that, this policy really looks at a really broad picture in terms of U.S. production, manufacturing, economy," she added. "So, it's not just China."

FILE - People look at semiconductors made by Tsinghua Unigroup on display at the China Beijing International High Tech Expo in Beijing, Sept. 19, 2020.

China is reportedly looking into curbing exports of rare earth minerals that are crucial to U.S. defense contractors that manufacture military weaponry.

"The government wants to know if the U.S. may have trouble making F-35 fighter jets if China imposes an export ban," said a Chinese government adviser as reported by the Financial Times last week.

China is the world's dominant producer of rare earths, a group of 17 minerals used in electric vehicles, consumer electronics and military equipment.

"While we call them rare earths as a share of the Earth's crust, they're not particularly rare," said Miller pointing to a U.S. Geological Survey report of American states that have rare earth mineral deposits.

Pini Althaus, CEO of USA Rare Earth, a company developing a U.S.-based supply chain for the minerals, is lobbying the government to expand domestic mining and processing.

"There is already surging demand for lithium and EV battery materials, and U.S. manufacturers will need new sustainable supply to meet near term goals this decade," Althaus said.

Rare earth minerals are processed using toxic chemicals and produce air emissions with harmful elements, such as fluorine and sulfur, and wastewater that contains excessive acid, and radioactive materials.

Despite the significant environmental concerns, Miller said the U.S. should look into expanding this sector, particularly if there is a national security need.

"There's activity in this space," Miller said. "The question is ... what's [the federal government's] role in accelerating or stabilizing the market?"