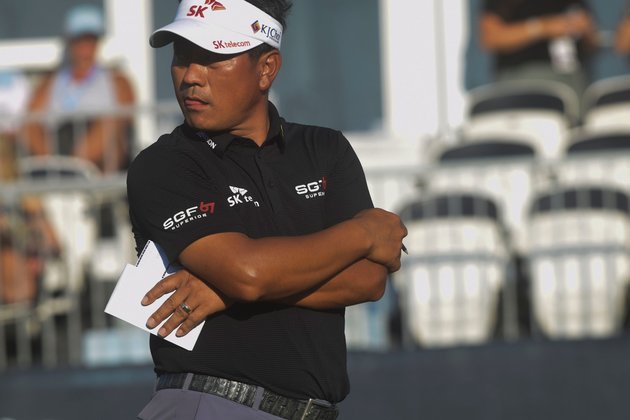 K.J. Choi became the first South Korean to win on the PGA Tour Champions when he notched a two-stroke victory Sunday at the PURE Insurance Championship in Pebble Beach, Calif.

Choi, 51, entered Sunday leading by two shots. With a final-round, 4-under 68, he finished at a 13-under 203 and kept his distance over Germans Bernhard Langer and Alex Cejka, who also carded rounds of 68.

It was Choi's first professional victory of any kind since 2012, when he prevailed at the CJ Invitational on the Asian Tour. The 2011 Players Championship was the last of his eight PGA Tour victories.

"You know, any winning is very special," Choi said. "Anybody strong in the mind could play (the Champions Tour). ... And the mindset, many good players here. So I am enjoying Champions and so happy."

The tournament was spread between Pebble Beach Golf Resort and Spyglass Hill Golf Course. Golfers played each course once over the first two days, and after a 36-hole cut, the remaining players all played Pebble Beach on Sunday.

Choi made all five of his birdies on the front nine to bound ahead, but went just 1 over on his back nine. It was still enough of a cushion to hold off Langer, who birdied three of his final five holes for a late run.

Langer will take the No. 1 spot in the Charles Schwab Cup standings following his T2 finish.

"It's fun to be in contention for the Schwab Cup once more," Langer said. "That's what really everybody wants to be at here, I think. And especially we didn't have one last year. If we had, I would have won that one maybe."

Scott Dunlap's 6-under 66 was the low round of the day and lifted him to a fourth-place finish at 10 under. Paul Stankowski (68) and New Zealand's Steven Alker (67) tied for fifth at 9 under.