Falling in Love at First Sight, Chery TIGGO 7 PRO Deserves the Title of "Best of the Year"

CANBERRA, Australia, Aug. 25, 2022 /PRNewswire/ -- As an urban luxury SUV for the young elite group, Chery TIGGO 7 PRO has won high reputation in the global market and was awarded the best-selling SUV of the year in Qatar.

TIGGO 7 PRO adopts the new Pro Family series design language and the design of Angel Wing Star front grille. By using a hexagonal diamond grille outline and a diamond-like star in the middle, it features a trendy style. The two sides of the front are paired with cool black LED headlights, just like the black crystal diamonds embedded in the front of the vehicle, which keeps blooming exquisite brilliance. The bottom is equipped with a front lip trim across the front face, which significantly stretches the horizontal view of the front face and further emphasizes its stylishness. While in the rear, the penetrating moire LED taillights not only show more youthful and sporty style, but also greatly increase the recognition. 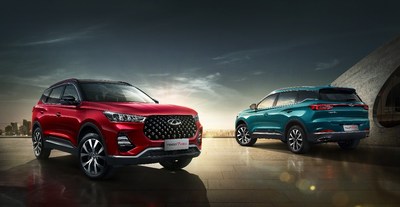 MoreoverTIGGO 7 PRO is equipped with the large 10.25-inch entertainment central control screen, the LCD instrument panel and air conditioning touch screen, achieving a strong sense of technology thanks to the linkage among the three screens. Additionally, the 360 fully transparent bird's-eye panoramic rear view camera, as well as functions such as vehicle machine interconnection, further reveal the practicality and superiority arising from the large screen.

When young users become the main consumers of automobiles, appearance as well as the technology configuration become the first and foremost criterion for choosing products. Therefore, TIGGO 7 PRO makes people fall in love at first sight by virtue of its gorgeous appearance and intelligent technology, and it is deserved to win the title of the best-selling SUV of the year in Qatar.

TIGGO 7 PRO will be launched after OMODA 5, and the prototype vehicle will also arrive in Australia in September together with OMODA 5 and TIGGO 8 PRO to have close contact with Australian users. In the future, what Chery is looking forward to is the market performance and localization design of its new products.