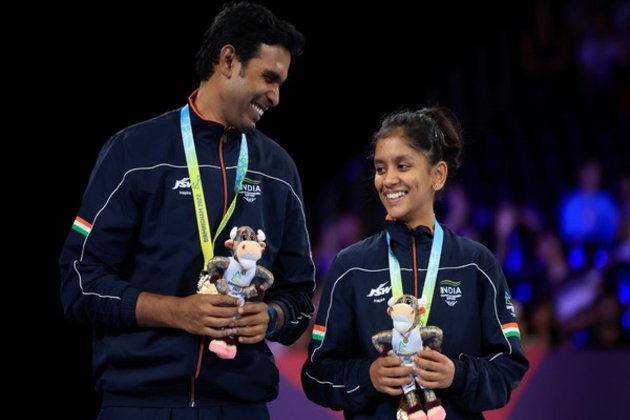 By Gurmeet Raj BatraNew Delhi [India], September 19 (ANI) Young table tennis sensation Sreeja Akula, who clinched the mixed doubles gold medal with partner Achanta Sharath Kamal in the Commonwealth Games 2022, has said that playing with the Indian legend paddler was an amazing experience and she never felt that she was playing with such as senior player.

Many were amazed by Akula's fortitude in the singles competition, but it was in the mixed doubles where she really excelled, teaming up with a renowned paddler. The Indian table tennis duo of Sharath Kamal and Sreeja Akula registered a 3-1 win over the Malaysian pair of Javen Choong and Karen Lyne 11-4, 9-11, 11-5, 11-6.

She missed the medal in the singles event by a little margin after failing in the bronze medal match against Australia's Yangzi Liu in a hard-fought battle 11-3, 6-11, 2-11, 11-7, 13-15, 11-9, 7-11. The 24-year-old played the entire match without giving up and made her opponent work hard for each and every point. The 24-year-old bounced back in the mixed doubles event to create history with the gold medal.

The young TT star opened up about how Sharath Kamal inspired her before the mixed doubles final. she talked about how the unexpected Sharath Kamal and Sreeja Akula's partnership was formed.

"We initially played in 2019 and that was really unexpected as he was supposed to play with Manika Batra, but she fell sick in between the tournament. So he prefered to play with me because I and Manika have the same playing style. This is the second time I played with him. After the national championships, my coach requested Sharath bhaiyya to play with me in the Commonwealth Games. And that is when he agreed and spoke to the federation that he would like to team up with me. I feel really fortunate to play with such a senior player," Sreeja Akula told ANI.

"Playing with Sharath Kamal was an amazing experience. He guided me really well during the match. He was so friendly. I never felt that I was playing with such as senior player. So thanks to Sharath who guided me. He motivated and supported me to do well throughout the tournament," she said.

Questioned about her first Commonwealth Games outing, Sreeja,24, said that she was well prepared for this multi-sports event.

"Yes, it was my first commonwealth games and I prepared very well before the tournament. I am happy that I played really well. I think it was the best moment of my life. It was my first Commonwealth Games, so I'm very happy that I did really well in my maiden games. The overall experience from the game was really good, not only from the game's point of view but playing in a multi-sporting event for the first time. I had a really good time there. The international exposure I had in the last two years helped me a lot in preparing as well as playing in Commonwealth Games," said the CWG 2022 gold medallist.

"Going into the CWG I was very confident and prepared. Definitely, I did not expect to do so well. I was prepared and worked really hard," she further added.

The Indian TT contingent finished with seven medals, including four gold and were most successful.

"Thanks to Lakshya Sports and Dream Sports foundation for helping me to participate in international tournaments," Sreeja said. (ANI)