SHANGHAI, Oct. 11, 2022 /PRNewswire/ -- The opening ceremony for commercial operations of Block B in phase five at Shanghai Electric's Mohammed bin Rashid Al Maktoum Solar Park (MBR Phase V) facility in Dubai was held at the site on October 10. The equipment started producing electricity for commercial use 17 days earlier than expected, marking another milestone in the construction of the Shanghai Electric facility. 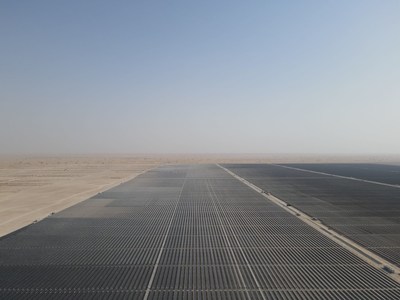 "We are excited to announce the official opening of commercial operations of Block B of the MBR Phase V project 17 days ahead of schedule," said Qiu Minghua, Vice General Manager of Shanghai Electric, at the ceremony. "Our company expects to complete the subsequent handover, as well as getting underway the construction of Block C, in due course."

In addition, Omar Al-Hassan, the CEO of Shuaa Energy 3, the company in charge of implementation of the project, also expressed his appreciation and gratitude to all parties involved for their hard work and construction achievements at the opening ceremony.

Earlier in the project, its construction had been negatively affected by the pandemic, with issues such as the increase in the prices of raw materials, labor and transportation, and the inability to ship photovoltaic (PV) modules to the site on schedule. To deal with these obstacles, a crisis team composed of business professionals was assembled to resolve the issues with all parties involved. After several rounds of discussions, Shanghai Electric and the relevant parties reached an agreement, paving the way for the project to get back on track and not only meet but also beat the agreed upon completion date.

In July 2022, the shipments of some batches of modules were again delayed. In response, a team was mobilized to speed up operations. Because of the team's efforts around the clock, any time lost in the project was caught up over the course of a few weeks. After 13-days of reliability and performance tests, the equipment in Block B was approved by the local power grid operator and officially put into commercial operation 17 days ahead of schedule, marking another important milestone achieved by the MBR Phase V project.

The project is divided into three blocks - A, B and C, each with a capacity of 300 MW. Block A was put into full operation in July 2021. The design for Block C has been provisionally completed, meaning that preparations for its construction, including equipment deliveries, and the laying of underground cables, are in full swing.

Those in charge of implementing the project said that they will continue to do whatever is necessary to overcome the challenges that were faced in implementing Block B, such as those caused by the effects of the pandemic, including staff issues, so that the commissioning and commencement of commercial operations of Block C can occur as soon as possible.

IRVING, Texas: Exxon Mobil Corp will wind down oil production in Equatorial Guinea in West Africa after its license expires ...

HOUSTON, Texas: QatarEnergy and ConocoPhillips have signed two sales and purchase export agreements covering at least a 15-year period, which ...

ISLAMABAD, Pakistan - Russia refused to give Pakistan a 30-40 percent discount on Russian crude oil, claiming that all volumes ...

NEW YORK, New York- U.S. stocks were uneasy early Wednesday following a release of a raft of economic data but ...

OTTAWA, Canada: Canada has launched its Indo-Pacific strategy, which includes spending worth $1.7 billion, with the aim of enhancing military ...